Value B
Counts the offset of this tile’s position relative to the position of the initial tile in southward direction(bottom left).

Value C
Counts the offset of this tile’s position relative to the position of the initial tile in eastward direction(bottom right).

B and C count in tile’s ground-units. Following picture shows values for B and C on a 4x4 Object.

The initial tile (red) is always in this upper corner, thus the values for B and C are always positive whole numbers (usually below 10).

e.g.: the image above with the red tile would require the entry: Dims=4,4,1 assuming that it has only one rotation

Objects that have a ground which is not a square should have two rotations, because it’s easier for the citybuilding-routine to find a decent place then

Dims for Res, Com and Ind

Stations are usually restricted to 1 tile but they need rotations. Busstops need 2 rotations therefore they got the entry Dims=1,1,2 while truckyards need 4 rotations and the entry Dims=1,1,4 (see pictures below).
Dims=1,1,8 and Dims=1,1,16 are special cases that both have only 2 directions.

The numbers in []-parentheses refer to value (Wert A von BackImage/FrontImage).

Stations with Dims=1,1,2 can be placed on a way that passes through as well as on the end of a way. This is used for busstops also tram, train...

Stations with Dims=1,1,4 may only be placed on the end of a way. This is typically used for truckyards or airstops.

harbours always need 4 views so they can be placed on every shore. They also use Dims=1,1,4 which in this case doesn’t mean they have to be placed on the end of some way. Another exception is they can reach into the water by using Dims=1,4,4 for example (see pak64’s LeuchtturmShipStop or Lighthouse Ship Stop for a harbour station with dimensions 1,5,4.)

Stops with dims=1,1,8 have a special feature. They got 4 graphics per direction. One is used if the stop is only one single tile long. If you build a longer stop the other 3 graphics are used. One of them is one end the other is the middle part that gets repeated if necessary and the last one is the other end. These 4 and the 4 for the other direction makes 8 images in total, therefore Dims=1,1,8, though it’s 2 rotations only.

The image below shows a trainstop which uses Dims=1,1,8, it has 8 backimages, one could also add 8 adequate frontimages to get a double sided station.

This is similar to the dims=1,1,8 stop above, but it has a second variation.

The next eight graphics [8] to [15] are the second variation. In the picture below they’re used to make the platform appear on the opposite site of the track.

Those tiles that appear in front of the track, need to be FrontImages.

The second variation appears in game only when you build a station on two parallel adjacant ways. The station tiles that you build on the second parallel automatically choose the other variation than the ones on the other parallel next to them{DIV} 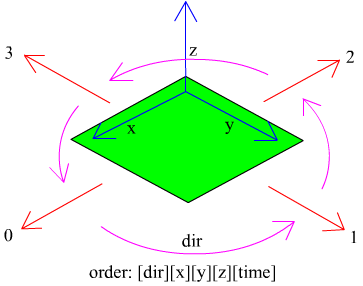 You can set the animation speed by writing “animation_time=n”. n is the delay in milliseconds until it switches to the next frame.
Top

If this is set to 1 this graphic will be displayed in winter when the scenery is snow covered.

No records to display